You are here: Home / Conferences / Past Washington / OL VII Washington

Archbishop Rembert Weakland - "In sum, one could say that the discussion at Vatican Council II about the nature of patriarchates or other for ms of primacy in the first millennium brought the argument one step for ward without totally resolving the issue. Although it was never fully articulated or explored as such, the tension came about in an effort to reconcile the concept of primacy of the Pope as defined in Vatican Council I with the other primacies expressed in the patriarchal structures which the Eastern Catholic Churches represented and sought to defend."

Archbishop Vsevolod of Scopelos -"The Patriarchs of the Ancient Pentarchy (Rome, Constantinople, Alexandria, Antioch and Jerusalem) should jointly call for an Ecumencial Council of all the Apostolic Christian Churches of the world that adhere to the principle of my presentation - one, holy, catholic and apostolic Church. It's purpose would be to consider how to re-structure the Churches involved, consolidate where appropriate, de-centralize where appropriate, and combine where appropriate, trying to establish a balanced organizational structure not only in size and shape, but in authority and responsibility. In essence, we need to try and utilize the best of both worlds - counterbalancing central structure with local flexibility."

Bishop Peter Stasiuk - "The issue of new Patriarchates acquires an ecumenical dimension the moment it is raised, because neither the Catholic Church nor the Eastern Orthodox Church have any clear means or guide-lines for raising a Local Church to Patriarchal rank, or bringing a new Patriarchate into existence. This is a problem which affects both the Orthodox and the Catholics." 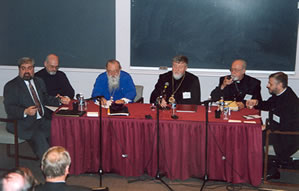 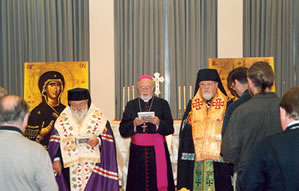 (L to R) Archbishop Vsevolod, Archbishop Rembert Weakland, Bishop Peter Stasiuk give a blessing at the Moleben to the Holy Spirit 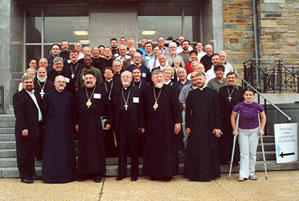 The group of participants at the Orientale Lumen VII Conference